Find a doctor with XiMED Connect™
Get Started and Select.

A gastroenterologist is a physician who specializes in disorders and conditions of the gastrointestinal tract. Gastroenterologists are Board Certified in this subspecialty area of medicine. Gastrointestinal problems are very common. Most individuals have experienced some form of stomach upset, nausea, vomiting or diarrhea associated with flu, or indigestion after eating excessively. The three most common gastrointestinal aliments requiring medical treatment are: gastroesophageal Reflux Disease (GERD) or Heartburn; Ulcers; and Colorectal Cancer.

Gastroesophageal reflux refers to the backward flow of acid from the stomach up into the esophagus. People will experience heartburn, also known as acid indigestion, when excessive amounts of acid reflux into the esophagus. Most people describe heartburn as a feeling of burning chest pain, localized behind the breastbone that moves up toward the neck and throat. Some even experience the bitter or sour taste of the acid in the back of the throat. The burning and pressure symptoms of heartburn can last as long as 2 hours and are often worsened by eating food. 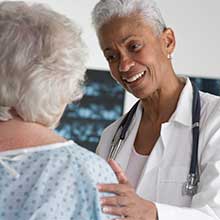 Our specialized physicians will provide you with preventative care and treatment for a healthy and regulated digestive system.

About 20 million Americans will suffer from an ulcer in their lifetime. Duodenal ulcers often occur between the ages of 30 and 50, and are twice as common among men. Stomach ulcers are more common after the age of 60 and are more commonly seen in women.

What is an Ulcer? An ulcer is a focal area of the stomach or duodenum that has been destroyed by digestive juices and stomach acid. Most ulcers are no larger than a pencil eraser, but they can cause tremendous discomfort and pain.

In the past, ulcers were incorrectly thought to be caused by stress. Doctors now know that there are two major causes of ulcers. Most often patients are infected with the bacteria Helicobacter pylori (H. pylori). Others who develop ulcers are regular users of pain medications called non-steroidal anti-inflammatory drugs (NSAIDS), which include common products like aspirin and ibuprofen. The use of antibiotics to fight the H. pylori infection is a major scientific advance. Studies now show that antibiotics can permanently cure 80-90 percent of peptic ulcers. Blocking stomach acid remains very important in the initial healing of an ulcer. Helicobacter pylori

Use of Non-Steroidal Anti-Inflammatory Drugs (NSAIDS)

The second major cause for ulcers is irritation of the stomach arising from regular use of non-steroidal anti-inflammatory drugs. NSAID-induced gastrointestinal side effects can best be avoided by using alternative therapy whenever possible. Low-dose corticosteroids or supportive drugs such as acetaminophen are alternatives to NSAIDS to consider. Four grams per day of acetaminophen has been shown to be comparable to analgesic and anti-inflammatory doses of ibuprofen for osteoarthritis pain and is not associated with an increased risk of gastrointestinal side effects.

Colorectal cancer is the second most common cancer killer in the United States, causing an estimated 55,000 deaths each year. More than 138,000 new cases of colorectal cancer are diagnosed each year. Men and women are equally affected by this disease.

Colorectal cancer is cancer of the colon and rectum, two parts of the digestive system also know as the large intestine.

All colon cancers arise from polyps, abnormal growths on the wall of the colon that may become cancerous over time. If polyps are identified at a very early stage, they can be removed before they become cancerous.

Complications of colorectal cancer can be reduced or even prevented with the simple step of regular screening. The screening program recommended by the American Cancer Society includes an annual fecal occult blood test and a screening flexible sigmoidoscopy every 3-5 years for all Americans over the age of 50. Those individuals with a high risk for colorectal cancer because of prior cancer, a family history of cancer, or a history of chronic digestive condition that predisposes them to cancer, should undergo regular surveillance know as colonoscopy. A recent study in the New England Journal of Medicine stated that more than 90 percent of lives could be saved through early detection of colorectal cancer.

Who is At Risk for Colorectal Cancer?

©Copyright XiMED 2023. Please note all medical services rendered by XIMED physicians are provided through such physicians' indepedent medical practices, and not through XIMED.